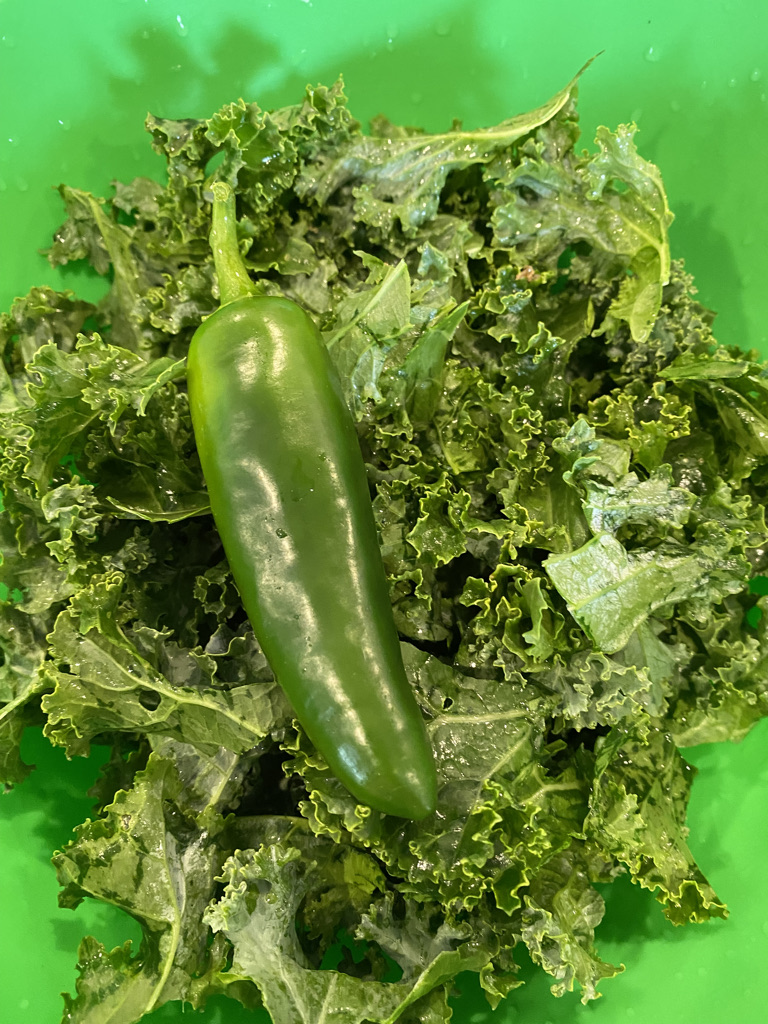 Kale is a pretty hardy plant! It will fair pretty well through the winter as well. It will bolt but still be pretty tasty! We have had Kale in our garden since we had the roof top one downtown! We would make kale chips on the grill or then in the air fryer! But hubby decided to plant a new kale plant in our newest beds in the front yard. What he forgot is that meant double the output!

I found this recipe on The Jolly Tomato and even though it’s summer and who wants to eat soup. Decided to try it and luckily it was a dreary day! I really enjoyed it! I made it mine, cause, that is what I do, and the garden had other lovelies in it, like jalapenos and garlic!

Not something sexy to take picture of, but good in the tummy!

The other thing i updated was to strain it. I just couldn’t handle the fibery output from either the kale or the leeks. But as hubby has a compost bin, the “goop” went to good use!

Pro tip on home grown kale – If you end up with “friends” on your curly kale bits – i read somewhere – apologies for whomever discovered it first – but put a drop of dishwashing liquid in the bowl that you are washing your kale in, then “massage it” (aka – be like a washing machine!)- now i know that a massaged kale salad just means it was full of bugs and they has to man handle the leaves to get those little guys off! But on the flip side, this is an immersion blended soup – so, what you don’t know about wont kill you. Just saying!

Pro tip on leeks – Leeks are dirty and in my opinion gross. All that dirt and little things that can get in there and die… Gah. I know I should be more grown up here, but some things… ooofa. We haven’t tried growing leeks, but i don’t think i’m interested… Anyway – the pro tip – Dirt is everywhere, so slice them and soak them and salad spin the! Dirt has no place in your finished soup! I do the love the smell of them after they are sliced.

At first I thought it was the leek ends that were causing the fiber in the soup – but even just using the ends as flavoring during the cooking didn’t help – so kale is your fiber! Up to you on your texture feelings on how your finish up the soup!

Such a nice flavor and lots of good for you veggies!
You can make it vegan by swapping out the broth.

I thought this was a great way to get some veggies and use up the kale. I have 4 servings in the freezer waiting for winter, and i’ll have a couple appetizers servings for dinner this week!

If you try it, let me know what you think!